Lately I’ve been drinking the utility-first CSS kool-aid with glee. As others before me have also noted, Adam Wathan’s blog post makes the argument quite well, so I won’t get into my reasons here. Since I just mentioned Adam, it won’t be a surprise that my utility-centric CSS framework of choice at the moment is Tailwind CSS, which he co-created (or “is currently co-creating” since they are currently hard at work on the road to 1.0. And really when can the creation of any piece of software be in the past tense?)

I set out to build a pre-launch landing page for a new web app idea for which I am attempting to take a community pulse. I’m tentatively calling it Rate my Refactor and the point of it is to facilitate discussion and advice around specific instances of refactoring and code quality. 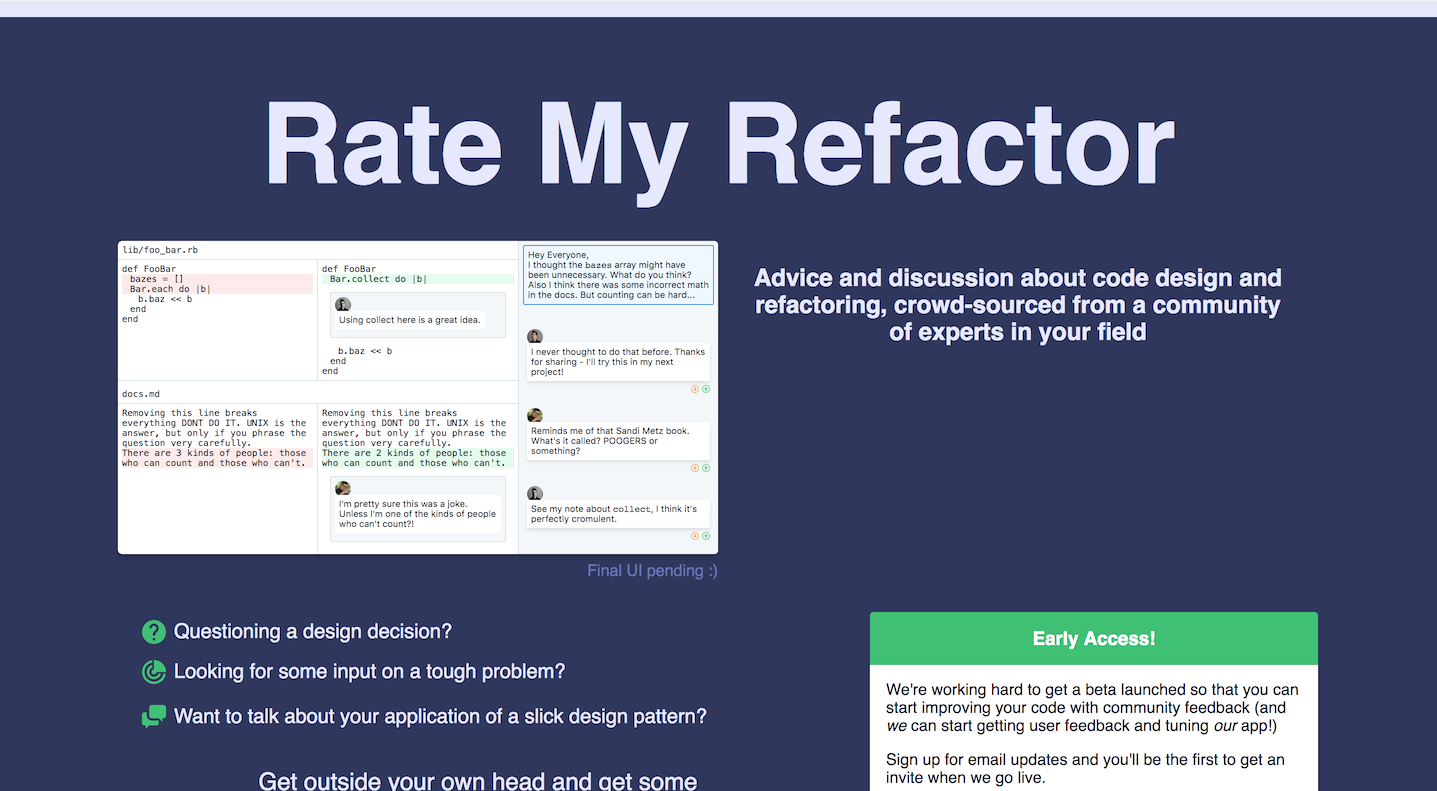 The speed and friction-reduction afforded by both Tailwind and Middleman make their team-up a natural choice for a simple landing page. In an effort to hit the ground running I popped over to Google to find some direction on getting Middleman, Webpack, PostCSS and Tailwind to all play nicely together. (disclaimer, I’m traditionally a back-end developer so the unholy union of npm/yarn/webpack/gulp/js/postcss/etc/etc doesn’t just come naturally to my fingertips.)

I found a whole lot of nothing Googling around for this. Probably because most front-end devs come out of the womb knowing their way around yarn balls, gulps, and webby packs - but as I said, that’s not me. Apparently I’m not alone: http://www.impostorroster.com/posts/cannot-understand-how-webpack-works.

So I figure there’s gotta be someone else out there looking for this answer.
Hello, someone! Here it is:

Show Me How To Do It Already!

Here’s a GitHub repo all set up for you. These are the main bits:

As an added bonus, this repo also has the configs necessary for an easy Heroku deploy.

I invite you to check out Rate my Refactor for an example of a basic Middleman+Tailwind+Heroku site. Since you’re reading a programming blog you probably care at least a little about refactoring - so why not sign up for the email list while you’re over there?!

Thanks! If you have any improvements or problems please drop them in the comments below.